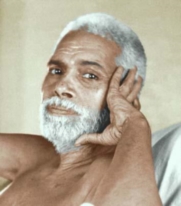 Sri Ramana Maharshi was born in 1879. To the 17 years reaches illumination through a notable experiences as if he had witnessed the death of the physical body, while he stayed in full conscience. After this transformation, he left home and he felt strongly attracted by the sacred mountain of Arunachala. For there he went and never left it. In the ashram that was formed around himself, he taught Advaita Vedanta’s (non-duality) by the purest and simple discipline of Self-inquiry.

The knowledge of Sri Ramana Maharshi is put here with the intention of helping those souls that feel the difficulty in meditation through own experience, and too, those souls who look effective forms to eliminate the thought, and all the disturbances of the ego mind.

Note: The method of Sri Ramana Maharshi is the method of Self-Inquiry and it can help Kriyayoguis on Laya Yoga, that means – the disappearance of the mind.

For us to understand Sri Ramana Maharshi and their teachings we advised to read the following books. They were not written by him but by devotees and people that stayed very closed to Sri Ramana (among these, the more acquaintance was Paul Brunton).

♥  For the beginners of the Ramana Maharshi teachings we advice all to start reading from this first 4 books, and in the following order:

Mouni Sadhu – Devotee of Sri Ramana. Books written by him are:

Paul Brunton. Books in Portuguese written by him:

If you don´t have this program on your computer you can install it clicking in the following site:

Google Earth lets you fly on your computer anywhere on Earth, to view satellite imagery, maps, terrain, 3D buildings and even explore galaxies in the Sky. You can explore rich geographical content, save your toured places and share with others.

How to arrive to the referred places?

In Google Earth goes to search and write INDIA. Following it goes with the mouse and drag the image to the south of Indian and later you will find Tiruvanamalai, making zoom (increasing the image) between the cities of Bengaluru, Chennai and Tamil Nadu. When you find Tiruvanamalai make zoom until finding the referred places.

Tamil Encyclopedia, with many informations, of the Illuminated in our Heart, Ramana Maharshi.

Documentary – The Sage of Arunachala

Documentary – Abide as the Self 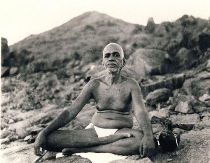 Dialogs of Inspiration between Ramana Maharshi and a seeker